Of all of the things I was excited about in James’ first year, perhaps none were as thrilling as the prospect of his first Christmas season. I briefly mentioned here that my mom reached mythic proportions when it came to making the season special for my sister and I. The stories of her scouring the state for our most-wanted gifts in the pre-Amazon era are epic. But it wasn’t just the materialistic. She was kindly dogmatic about us establishing meaningful traditions for us- watching”It’s a Wonderful Life” every Christmas Eve on the drive home from my grandparents, making us monkey bread to devour every Christmas morning clad in our new festive pajamas, and capping off every delicious Christmas dinner with our peppermint ice cream while we talked about our favorite moments of the year. B and I are just excited to start our little family’s own important traditions with James. Here’s a few of him soaking up some seasonal moments! 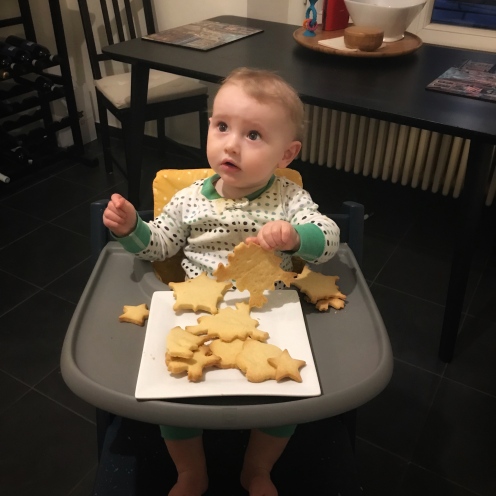 baked but did not eat!

posing before a Christmas party!

We were hopeful to kick things off in the Black Forest, Germany (no one does a Christmas market like the Germans) but poor little James came down with a terrible fever which ransacked our whole house, and after a busy fall of travel (Prague and Vienna) I’m so glad that we stayed home and got him well. After explaining the situation, our really kind Airbnb hosts also waived some of the cost, which was very, very generous of them. We hope to go back in the years to come and stay at their beautiful property – in the meantime, if you need a detailed run-down of Black Forest markets for next year, happy to share my notes 😂because I was incredibly excited for that trip and would love if someone took it!

But fear not – we had quite the Franco-Swiss Christmas extravaganza!

We began just over the border at “The Hamlet of Santa Claus” in France. While there is no “American department store Santa” they do have a series of beautiful displays – a large and incredibly detailed elves workshop, Santa and Mrs. Claus’ kitchen and living quarters, and in a bizarre twist, an entire house of pacifiers. It’s apparently a children’s milestone to “turn in your pacifier” to Santa when your parents decide it’s time for it to go and truly *thousands* were on display. It was odd to say the very least,  but as a parent with a baby somewhat addicted to his pacifier, I wouldn’t mind if we were around another year to turn ours in next season! It’s €13.50 per adult and €7 for kids 3-11 and only about 20 minutes from Geneva. 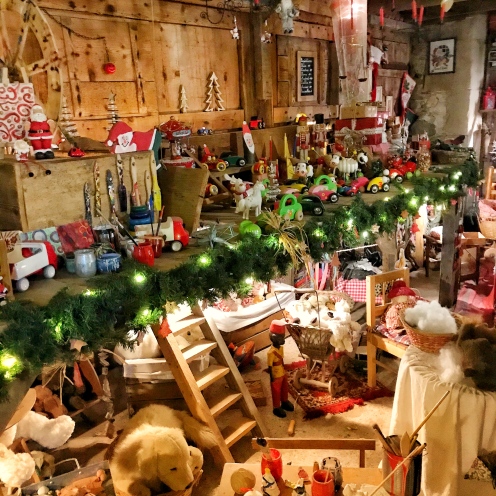 get used to it, kid

did not have to turn in his own binky

Our next stop was the Montreux Christmas Market, acknowledged to be the “best” market in the French speaking part of Switzerland, the Romandie. It was the market’s 25th anniversary and boy was it crowded, and not just for those clamouring  to see Freddy Mercury again. Go on a weekday if you can!

On a clear day, strolling the lake with views of the Alps with vin chaud in one hand and a tartiflette in the other is certainly helps to make the season bright, especially since you can see Santa “take off” in a lit sleigh over the lake. If you’re going with a baby I’d strongly recommend using your ErgoBaby and only bring a stroller if you have the BabyZen YoYo+ or Bugaboo Bee. I’m so, so pleased that we got to enjoy the mountain views over the lake in our last Christmas season in Switzerland. No cost to attend, just the train ticket if you’re traveling that way and pay for whatever food or gifts you purchase.

Taking the train to Montreux Market

family photo at on Montreux

you can get fondue anywhere in 🇨🇭

We also took a few visits to the, also free to enter, Noël aux Bastions, market in Geneva, in its second year of operation. You won’t find handmade ornaments or Advent calendars or candles (which is what I was really hoping for to commemorate James’ first Christmas) but what it lacks in product, it makes up for in food – and most importantly – it’s gorgeous. There are beautiful strung chandeliers from the trees, an ice skating rink, and endless stalls of every cuisine  from lobster rolls to Lebanese mezze. iPhone photos don’t do the lights justice.

a different kind of pearly gate

all lit up in Parc des Bastions!

And believe me – James got tons of “first Christmas” relics with the help of my British friends who turned me on to the European version of Etsy – notonthehighstreet.com! 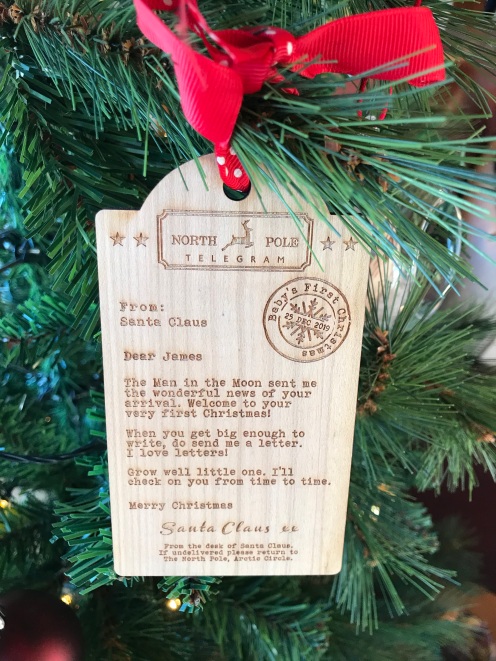 including a letter from Santa 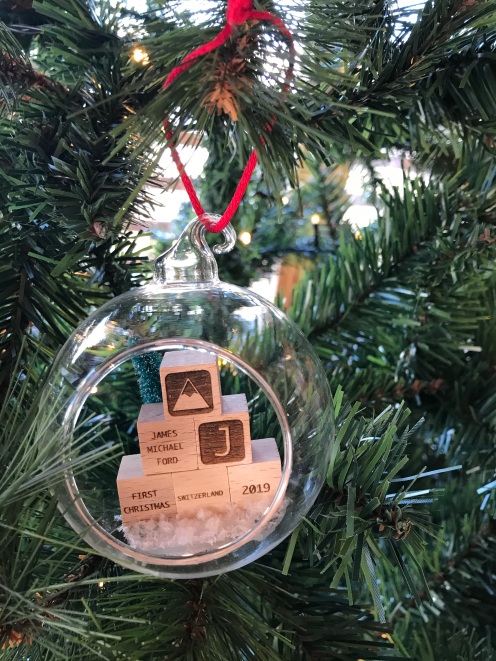 Last, before our Alps Christmas with the whole family, we we went back to Montreux with my in-laws to meet the much lauded real Santa at the top of Rochers-de-Naye. Like Santa in Miracle on 34th Street, he spoke every language and was very happy to meet his new American friend James, who received an official certificate that he had met the genuine article.

It was a good exercise particularly as James was beginning the prime “separation anxiety” milestone that we continue to combat! Tips welcomed.

not an enormous fan 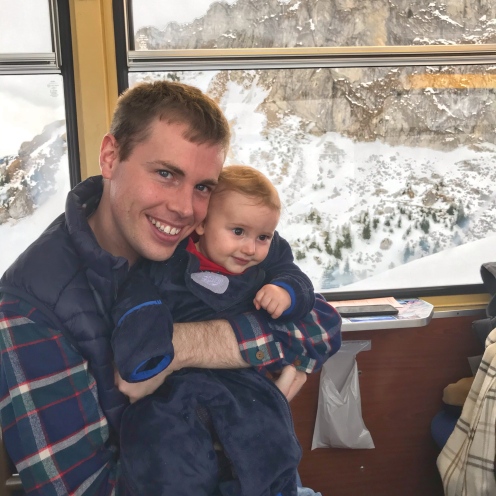 taking the cog wheel up!

You must reserve tickets online and from Geneva you also need to purchase a ticket for the hourish high speed train to Montreux. You pay your total (25 CHF) at the Montreux station and take another hourish older cog wheel train up the mountain for the visit and lunch. It was pretty foggy, but we got to see some snow and enjoy the ambiance of Christmas even closer to the North Pole! 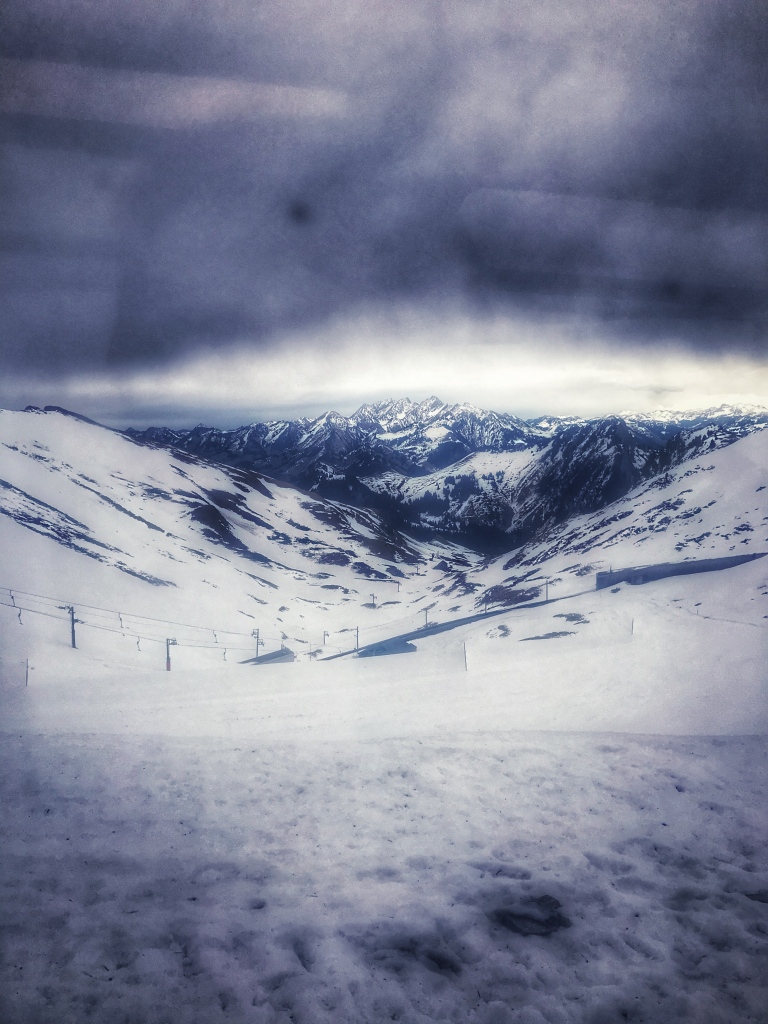 Next up I’ll share our two weeks in heaven in the Four Valleys area of the Swiss Alps. It was time with our family that we’ll always treasure!

THANKS SO MUCH AS ALWAYS FOR READING! YOU CAN FOLLOW ALONG ON INSTAGRAM & CHECK OUT THE TRAVEL TRACKER FOR OUR ARCHIVE OF PLACES VISITED SO FAR!

This site uses Akismet to reduce spam. Learn how your comment data is processed.