You might ask, isn’t that in New York? And you wouldn’t be wrong- while the New York office is the home of the security counsel and more focused on political issues, Geneva is home to human rights, peace, disarmament, health (the World Health Organization is also here too!) and economic and social issues.

Tours are offered in 12 languages (but most commonly in English and French, so call ahead for other options) and open Monday to Friday with four tours a day – 10:30am and noon, and 2:30pm and 4pm) at a cost of 12 CHF per adult ticket.

Plan to arrive an hour early with your passport in hand, as there is a detailed security check before you enter.

To get to the tour take the 8 Bus from Gare Cornavin to the Appia stop. You can also take Bus 5 or 11 to Nations for the sweeping view of the grand entrance, just note that you have a slightly steep walk ahead of you to get to the appropriate entrance for tours near the Appia stop.

The grand entrance showcases member state flags as well as a famous “Broken Chair”  commissioned by Handicap International and dedicated to victims of land mine accidents. Each day, it is the gathering site of protests across the spectrum.

We had a very nice tour guide originally from Spain, who shared that the UN has six official languages – English, Arabic, French, Mandarin, Spanish and Russian. Notably absent is German, as the United Nations was formally founded after World War II, and for obvious reasons, Germany was persona non grata. The United Nations is sort of a “phase two” of the League of Nations, which you might recall was the brainchild of American President Woodrow Wilson (a real celebrity in Geneva) after the close of World War I. The League was getting up and running but put on pause at the start of World War II, and somewhat “relaunched” with 52 member states as the United Nations after the dust settled in 1945. Today, there are 193 member states.

The UN was set up in Geneva because it already was the home of the Red Cross and was ideally geographically located in the center of Europe – however, Switzerland, proudly neutral, did not even join until 2002.

One pleasant surprise on the tour was the amount of artwork – all donated by member states to show the beauty of worldwide collaboration. Around each corner was a new work in a variety of mediums – I admittedly don’t know very much about modern art, but it was very impressive.

The tours vary based on what rooms are available, and what meetings are in progress. We heard that there are more than 12000 meetings per YEAR. I know these are very, very hard pressing issues but any kind of meeting overload is my personal version of hell. Think of the catering bills!!! So many sad sandwiches left behind. But, there are certainly worse places to be stuck in meetings – overlooking gorgeous Lake Geneva.

Views from the UN Office Building

Fortunately, we were able to visit the General Assembly Room, home to the largest sessions and an enormous ceiling painting unveiled by Spanish artist Miquel Barcelo in 2008. He used more than 100 tons of paint on the 16,000 square feet large work, and its meaning seems open to interpretation. 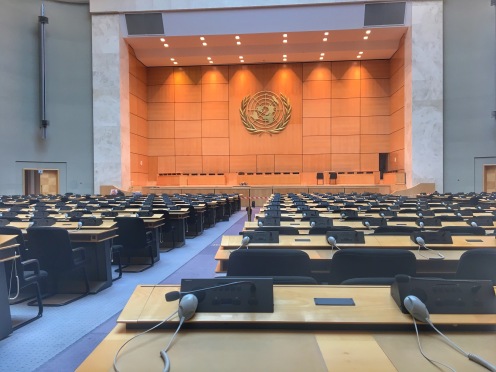 In this Assembly room are of course many interpreter stations. One thing we learned was that translators at the UN are forbidden from translating any jokes made in speeches. If you have ever made a joke in a text message that did not come across properly to the reader, you know how easily words can be misunderstood even when you speak the same language. But a joke made in Spanish might come off horribly in Arabic. If a speaker does make a joke, the translator will simply note “the presenter has made a joke” – and everyone will laugh politely. The speaker gets an ego boost and no one riots.

On our way out, we were slightly shocked to be be bid farewell by peacocks! Our guide told us that the grounds once belonged to the Revilliod de Rive family who asked that the peacocks should roam freely on its grounds. Today, most of the birds were donated by a zoo in Japan, and from India.

It was a very interesting look at the United Nations – one of the places that makes Geneva such a thriving international metropolis. While certainly much has changed since it’s founding and perhaps could be adjusted to better suit our changing world, visiting was an optimistic reminder about the possibilities of international cooperation. My brutally honest answer is – if you have a day in Geneva, don’t feel pressure to rush to the UN – spend it at the lake. But if you are really passionate about this work, don’t let me sway you!

In just hours, we head home to the US for the wedding of some very special people – so off the grid for the next week or so, and do…

THANKS AS ALWAYS FOR READING – AND LET ME KNOW WHERE WE SHOULD VISIT NEXT!

This site uses Akismet to reduce spam. Learn how your comment data is processed.